When we first saw the Strucket we thought it was perfect for dirty nappies, but let’s face it, most campers don’t have to deal with dirty nappies.  However, after playing around with the Strucket, we soon came to realise how useful it is around the campsite.

The Strucket is the brainchild of Kelly Lavery, a Sunshine Coast mum with three kids, who was desperately trying to find a solution to her soaking problems. Sick of putting her hands in dirty pooey nappy water, Kelly went in search of a hybrid Bucket and Strainer Solution. There were simply none available, so she set about designing her own.

Kelly proudly shows us her new invention the ‘Strucket’

The result is the Strucket! And not only did it solve her problem, but what she has created has solved a whole lot of issues for the camping industry.  The Strucket is designed, so that the strainer fits perfectly into the bucket. A series of groves not only allows the water to seep through to the bucket area, but also acts as a locking ledge for the strainer to sit into once lifted from the water, allowing any residue water to strain into the bucket. The bucket then has a built in plug that allows you to drain the water without the need to tip the bucket.

Kelly was adamant that because this was her own design, that she wanted it made here in Australia.

It was so important to me that the Strucket was made here in Australia, yes, it costs us more in production costs, but it means it is a quality product and keeps things local.

Have a quick look at our video to see just how versatile the Strucket can be, especially when camping or caravanning.

See the Strucket in Action 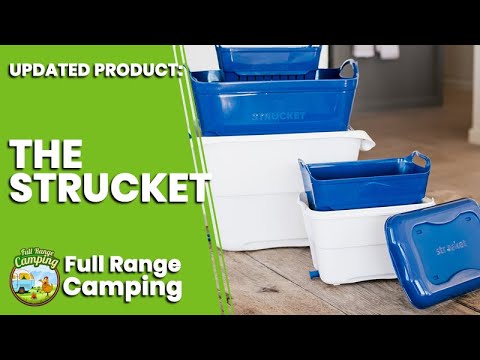 Knowing we were so passionate about the camping industry, Kelly showed us her Strucket and asked if we could think of ways it would be useful for campers. Between us, we have come up with some brilliant ideas and uses for the Strucket.

Our first thoughts for using the Strucket were for doing the Dishes. We all hate doing them, anytime, let alone when camping. It is always a chore, and unless you have a caravan with a sink or access to a camp kitchen, most will use a bucket, or in some cases the hand basin in the toilet block. Then you have nowhere to drain and dry them.  The Strucket acts as an all-in-one sink where you can wash the dishes, rinse them, then leave them to dry by simply locking the strainer into the edge of the bucket. This makes for a much more efficient and hygienic way of doing the dishes while camping.

Whilst playing around and soaking clothes and dirty nappies, Kelly came across the swirling action of the Strucket as the strainer is lifted in and out of the bucket. We then tried and tested this concept and found it works brilliantly for washing clothes while camping. By half filling the bucket with warm soapy water, then placing clothes in the strainer, lifting in and out several times creates a gentle washing action, similar to the agitator of a washing machine. Granted you couldn’t use it to do the sheets, but for smaller loads, like dirty socks and undies, it is ideal.

The straining action acts as a small washing machine agitator

Our trips to the beach always result in wet sandy swimmers which usually end up in a plastic bag, in the back of the car, forgotten about and left to stink, not to mention sand everywhere. So, we tried the Strucket and put our swimmers, wet and full of sand into the strainer section.  It meant the car stayed dry for the trip back to the van, then, we could rinse the sand out straight into the bucket and put the swimmers straight into the wash. Being in the strainer it also meant that if we forgot the wet clothes in there, as you do, they still aired and didn’t start to stink.

Ideal for the kids swimmers for beach days, the sand falls through when you rinse them

While we travel, we love using Organic Fruit & Veggies, but they are not always available, so to remove pesticides, we always soak our Fruit & Veggies before using them. Trouble is, we usually do this in the kitchen sink, which means we can’t use it for anything else, plus, we can’t strain them in there.  We found the Strucket so much easier. We were able to just put all the Fruit & Veggies in the strainer, fill the bucket, add the soaking solution and leave it. Then after time, just lift the strainer out, lock it on the bucket and let the Fruit & Veggies dry out. The drain at the bottom of the plug was ideal, as we could just drain the water straight out into the sink.

Our Veggie soaks before and after getting the Strucket

For the keen fishers out there, the Strucket makes a great fishing bucket. Rather than leaving your bait soaking in water to defrost, you can start off in the bucket and lift out the strainer when you are ready to drain excess water and prevent the bait from going mushy. Or, once you have your catch, you can just lift out the strainer and carry it over to the cleaning table, it is also great for cleaning fish, muscles, oysters or prawns.

Ideal for stopping bait getting mushy, or even cleaning your catch

Washing the Car or Caravan

Most campers take pride in keeping their caravans, motorhomes and cars clean, and after a great camping trip, the van is usually covered in lots of dirt, mud and grime. Washing the van with a normal bucket means after a few dips, this grime settles at the bottom of the bucket and is mixed back in each time you dip your sponge. This makes for dirty water to continue washing, and in some cases can cause surface scratching on the duco.  The design of the Strucket actually prevents this. The slots at the bottom of the strainer allow the dirt and grime to drop through and settle on the bottom of the bucket, below the surface of the usable water, therefore keeping the main body of washing water cleaner and free from abrasives.

Child labour at its best…but they are having fun, and the dirt falls through to the bottom of the bucket

Here is one we didn’t think of, but a keen golfing camper did. Turns out the Strucket makes a great Golf Ball cleaner. Using the same principal as washing clothes, half fill the bucket with clean soapy water, place your balls into the strainer and lift it in and out. Simple and effective, and you have clean balls!!!